“This amazing opportunity allowed me to complete 27 credits by the time I graduated high school!” 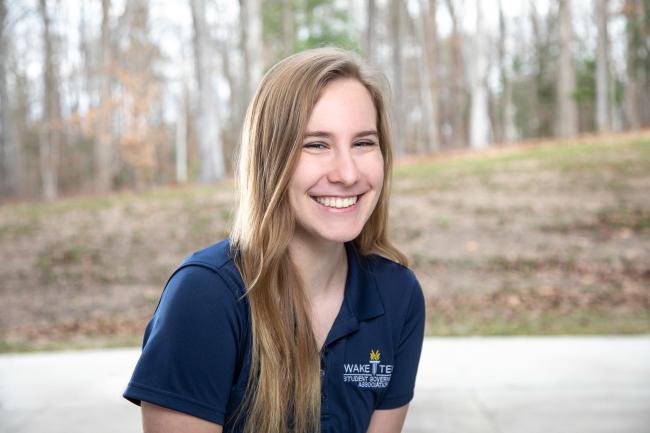 It was a rough start for Tara Courtney, the youngest of three children, who moved to Raleigh when she was 6. Her parents divorced, and she grew up moving from school to school. Tara suffered from depression, but pushed through with the help of her strong faith.

In 2017, as a high school senior, she discovered Wake Tech’s Career and College Promise Program, also known as dual enrollment. “This amazing opportunity allowed me to complete 27 credits by the time I graduated high school and is the reason I chose to go to Wake Tech in the first place,” Tara said. The program offered her free tuition while in high school, and gave her a jump-start on a degree.

“The more time I spent at Wake Tech, the more I began to love the atmosphere, community, resources, opportunities, and even professors, such as Dr. Furbish, my Anatomy and Physiology  professor, who made a grand impact on my life and education.”

She will earn both her AA and AS degrees by the end of spring 2019. She hopes to transfer to either UNC Charlotte or Appalachian State to pursue a bachelor’s degree in nursing. “I chose this career because I have a passion for helping people and want to dedicate my life to serving others, like my parents did. My father was a firefighter captain and my mother is a nurse.”

Tara has big goals. After earning a BSN, she wants to work as a nurse in an intensive care unit while pursuing a doctorate in nurse anesthesia. Leadership development at Wake Tech may help her get there. Tara is involved in the Phi Theta Kappa Honor Society, several clubs, and serves as Vice President of the Student Government Association (SGA). “I originally joined because I thought it would be a good opportunity to take advantage of, but it became so much more,” she says. “Being on the SGA Board is more than just meetings; it’s being involved in a family of people who care about making the community college better for all students.”