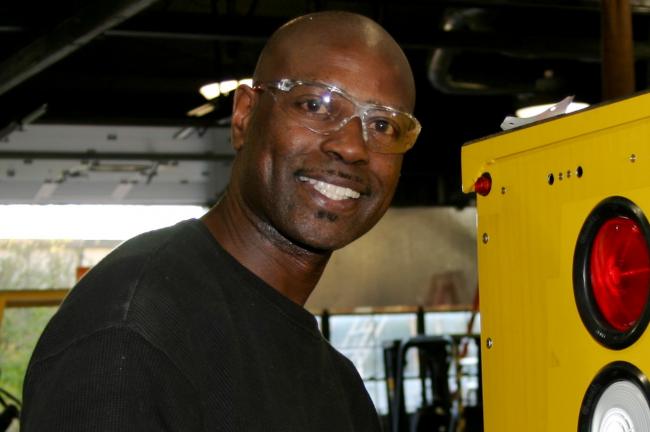 “Going to Wake Tech was the best move I ever made.”

Forty-four-year-old Terry Baldwin is a man with a plan – a plan made years ago. After high school, Terry wanted to go to college, but funds were scarce. “So,” he says, “my plan was to go into the military, serve my country, and then go to Wake Tech on the GI Bill®.”

He enlisted in the Navy in 1990, and worked as a mechanic during Desert Storm. The work suited him well and he advanced quickly; when his tour ended, his commanding officer asked him to stay. Terry surprised the officer by saying no and telling him he planned to go to college back at home.

Terry graduated from Wake Tech’s Heavy Equipment Mechanics program in 1997. He’s worked at the NC Department of Transportation for the past 16 years and was recently promoted to Advanced Diagnostics Technician. “I got great training from instructor Ronnie Lowe,” Terry says, “and I use what he taught me all the time – even OHM’s law and PASCAL’s law.” He says staying current on new technologies is critical in his field, so he will be returning to Wake Tech in the spring to upgrade his computer skills.

Terry is now a father of two and glad that he stuck to his plan. “It feels good to know I can pay the bills and buy my children some of the things they want,” he says. “Going to Wake Tech was the best move I ever made.”