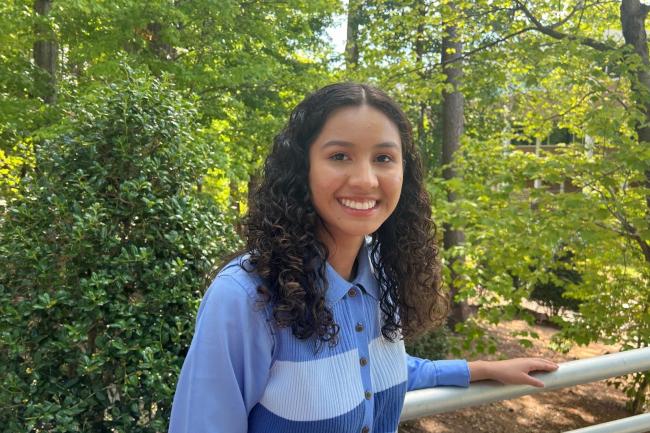 "The ILC was a major factor to my success. I’m so grateful for the support and encouragement I received."

As a high school student, Isabella Hernandez never felt confident with math, so she admits she was nervous when she enrolled in pre-calculus her first semester at Wake Tech.

"I attempted it, but it became too overwhelming. So, I ended up dropping the class," she said. "Because of my struggles, I avoided math classes until my final year."

While taking accounting, Hernandez's instructor introduced her to math tutoring support at the Individualized Learning Center (ILC), and she quickly started seeing success.

"It was life-changing," she said.

Hernandez soon developed a core circle of tutors who helped her understand difficult math concepts but also taught her how to be patient and confident.

"Isabella just really grew as a student and had a lot of perseverance over the time she spent in the ILC," said Shannon Aycock, an ILC math instructor. "She refused to quit or give up, even when the course was really hard for her."

Through the ILC's support, Hernandez succeeded in pre-calculus, business calculus and statistics at Wake Tech and earned her Associate in Arts degree this past May. She transferred to the University of North Carolina at Chapel Hill, where she is now pursuing a bachelor's degree in management and society.

"I earned an 89 in statistics my last semester at Wake Tech, and I was so proud of myself," she said. "I spent a lot of time at the ILC my final year, but this wasn't a chore. I thoroughly enjoyed going, and the instructors really care about their students. Ultimately, the ILC was a major factor to my success and has eased my transition to UNC. I'm so grateful for the support and encouragement I received."