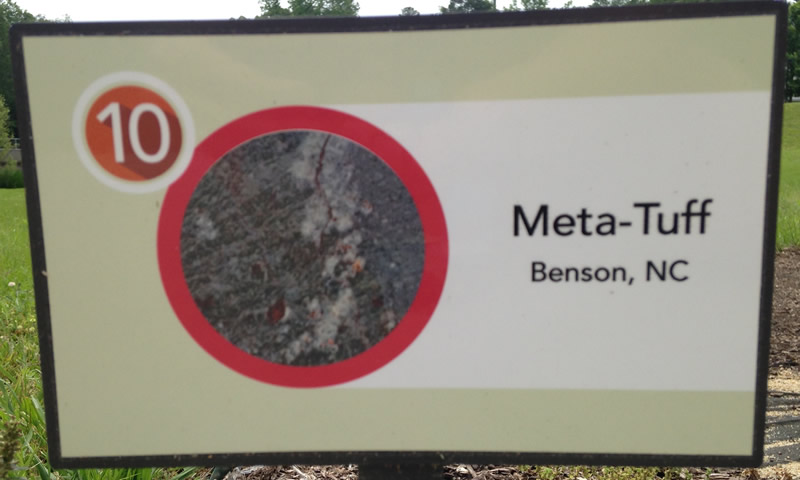 Description:
A gray rock that looks somewhat squished and flattened. On the flat sides, you can see occasional larger, dark-colored minerals. 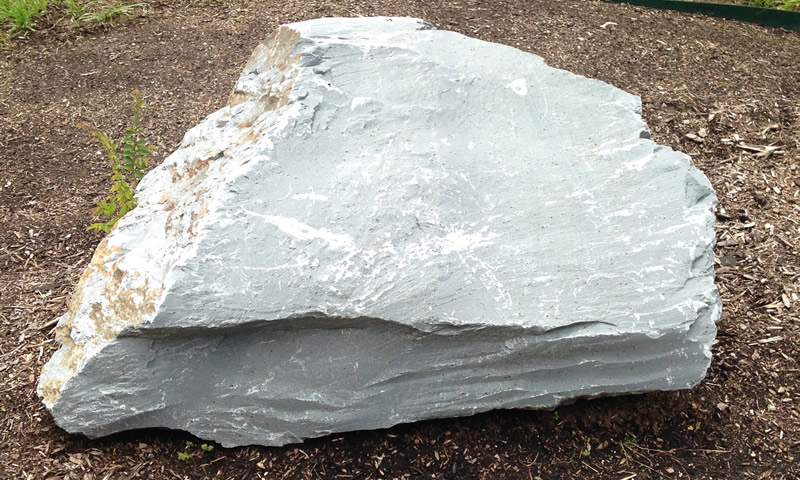 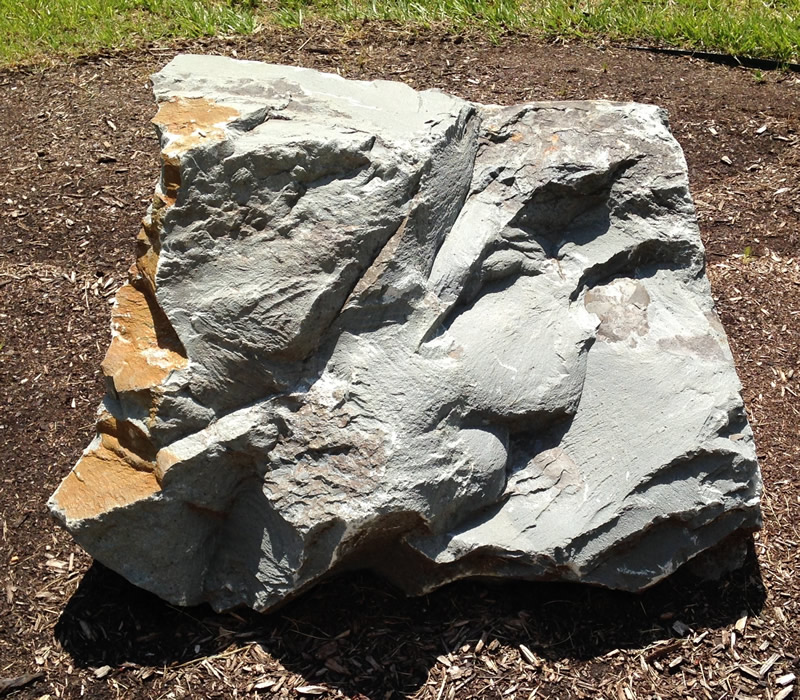 Unique features:
Foliation, isolated dark-colored minerals, bedding layers in the original ash, and some rusting of the surfaces. 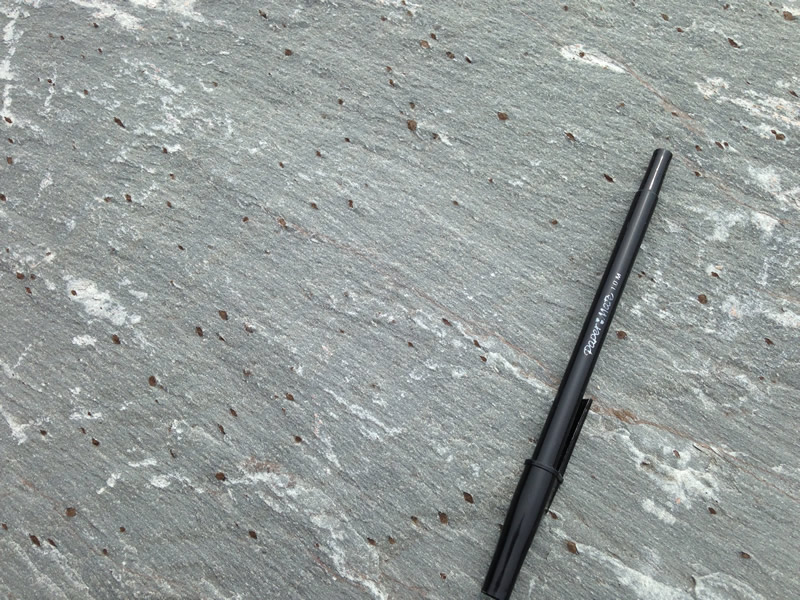 Figure 3: The surface of the meta-tuff. Notice the fine-grained gray rock, with darker minerals scattered throughout. You may also be able to notice the bedding planes: In this image, this subtle feature runs diagonally from bottom left to top right; they are lines of slightly different shades of gray. Black ballpoint pen for scale.

How did it form?

Meta-tuff is a metamorphic rock that formed when volcanic tuff, an igneous rock composed of ash ejected from an erupting volcano, was subjected to high heats and pressures sometime after the ash had lithified to become a rock.

How would a geologist figure out how it formed using rock characteristics?
When a geologist examines the meta-tuff closely, he or she will likely notice bedding planes.  Bedding planes are layers that form as rock material, in this case ash, settles from above while the rock is forming. If you look closely, you might notice that some of the bedding planes contain larger grains, while some contain smaller grains. The different bedding layers suggest that this rock originally formed through successive ash falls from a nearby explosive volcano. Some of the ash would have been made up of larger particles, and some of smaller particles. As the ash fell, it would have been hot, and the heat would have welded the ash pieces together to form a solid rock. 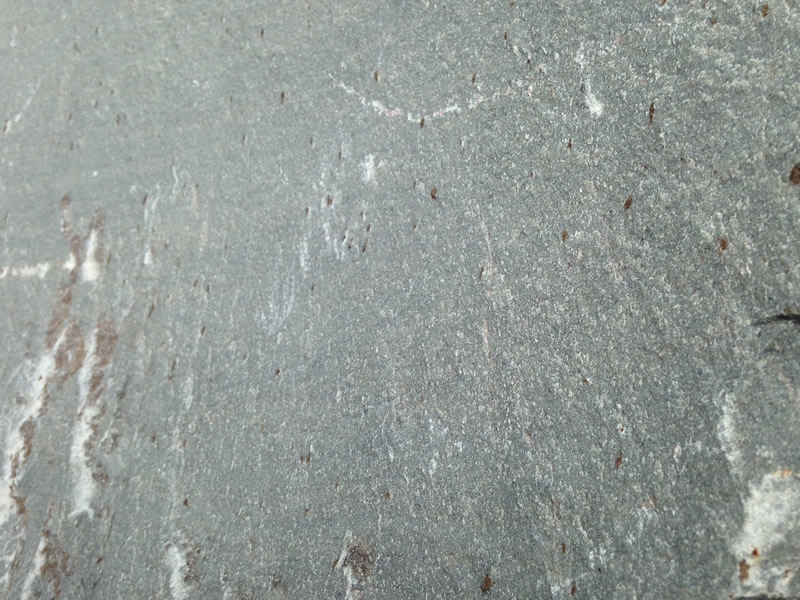 Figure 4: This is an image of the bedding planes in the volcanic ash that was metamorphosed to create the meta-tuff. Look for roughly horizontal layers that are distinguished from each other by subtle changes in the shade of gray.

Sometime after the ash lithified into a rock, it underwent metamorphism. The evidence for this is the foliation that we see in this rock. Foliation is a feature that forms in rocks that are subjected to high heat and pressure. The intense pressure causes mineral grains to squish into flat shapes and rotate to all be parallel with one another, creating a squished and layered appearance. The only way to form foliation is through intense heat and pressure. 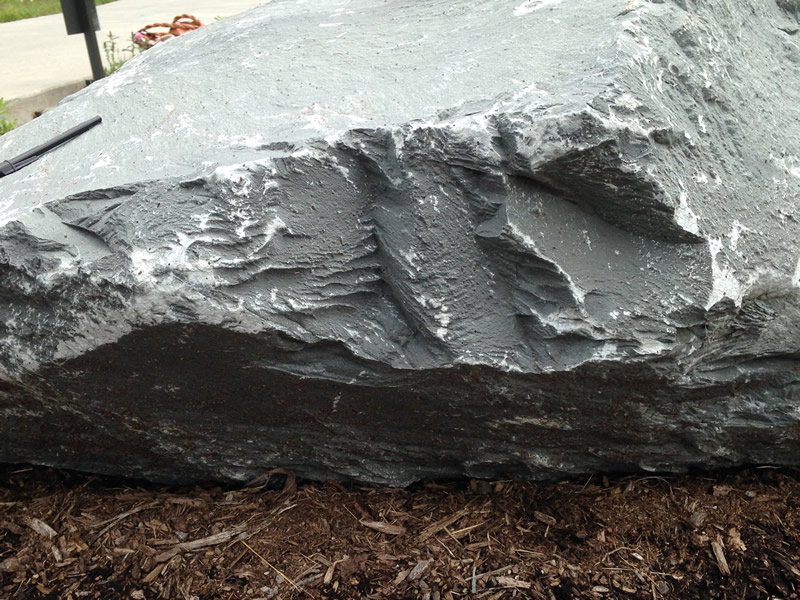 Figure 5: This image shows the edge of the meta-tuff boulder, showing the foliation layers revealed there.

When looking closely at the surface of the rock, geologists would also notice that most of the grains are very small, but that there are isolated larger, darker-colored minerals.  Laboratory experiments have shown that when a rock undergoes metamorphism due to heat and pressure, sometimes the heat and temperature conditions change so that existing minerals are no longer thermodynamically stable in their original form. When this happens, the elements in these minerals rearrange themselves into forms that are thermodynamically stable at the elevated heat and pressure. It is likely that these larger minerals formed in this manner. The new minerals that formed may be staurolite or garnet, which are both dark-colored minerals that form in this way during metamorphism. 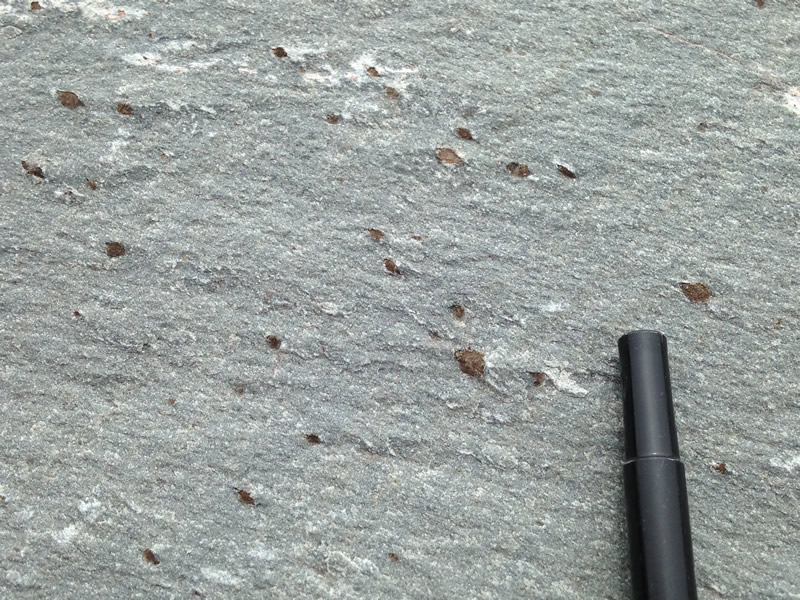 Figure 6: The dark colored minerals above likely formed during the metamorphism of the volcanic ash.  Black ballpoint pen for scale.

The orange rust stains seen on the meta-tuff are evidence of chemical changes that occurred to the rock after it was metamorphosed. When minerals that contain iron are exposed to the open air, the iron will oxidize or rust, giving the boulder this rusty appearance. 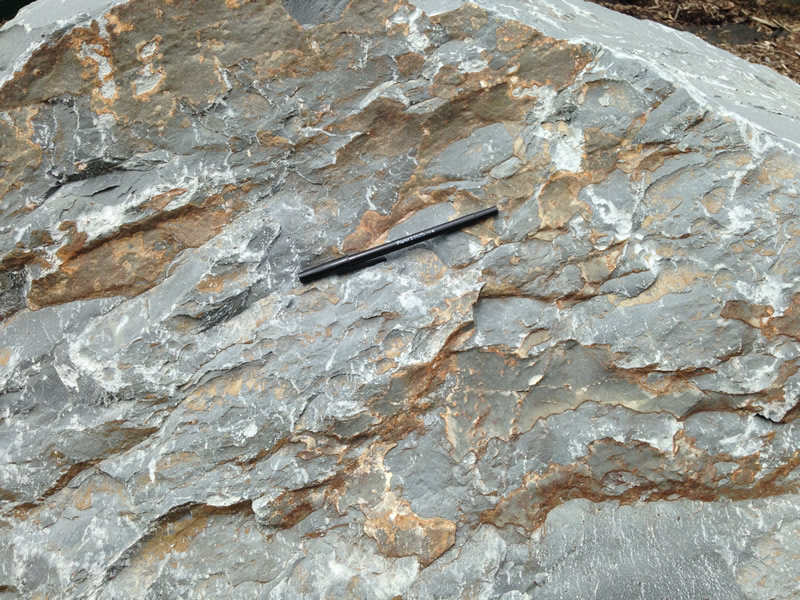 Figure 7: In this image, we can see the rusty stains on the edge of the boulder. Black ballpoint pen for scale