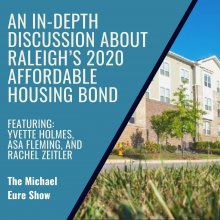 Please join Citizens Supporting Raleigh Affordable Housing Bond Advisory Committee for an in-depth conversation about Raleigh’s $80 million affordable housing bond. The conversation will be led by Yvette Holmes, VP of Resources and Partnerships at DHIC, Asa Fleming, Former President of the NC REALTORS® and Allen Tate realtor, and Habitat of Wake County Director of Advocacy, Rachel Zeitler. The group will discuss the citizen-led effort to address the critical needs for affordable housing across the city.

Yvette joined the DHIC team in 2012 and has over has 30 years of experience as a nonprofit administrator, fundraiser, and public and civic engagement specialist. Yvette served as co-project leader for the Washington Terrace redevelopment project and was responsible for leading the resident and public engagement process. She is responsible for DHIC’s community relations and public-facing programs, as well as cultivating new and existing partnerships to advance the mission of the organization.

Asa has worked in real estate since 1998 (first in New York before moving to NC in 2001), and is experienced in assisting clients in varying situations including everything from First Time Homebuyers to Move-Up Buyers, as well as Investors. Asa is an active member of the Raleigh Regional Association of REALTORS® (RRAR), the North Carolina REALTORS®, and the National Association of REALTORS®, where he has served on multiple committees. Asa is a RRAR Past-President and was named the 2016 RRAR REALTOR® of the Year. He is currently the President of NC REALTORS®. Asa was honored to be a member of the 2014 National Association Of REALTORS® Leadership Academy class and served as the 2017 Chair of the Leadership Academy Advisory Group. He is also active in a variety of local organizations including The Carying Place, Southeast Raleigh Promise, and Rebuilding Together of the Triangle.

Rachel is the Director of Advocacy at Habitat for Humanity at Wake County. Habitat Wake has partnered with more than 1,000 families since 1985 to build homes, yet one in four families in Wake and Johnston counties are cost-burdened and need affordable homes. A cost-burdened family that spends more than 30 percent of their income toward housing may have difficulty affording other necessities such as food, transportation, education, and healthcare.